On April 8, 2019 the College of ACES Alumni Association recognized four outstanding alumni as the 2019 ACES Award of Merit winners who have made a significant impact in their careers and their communities. 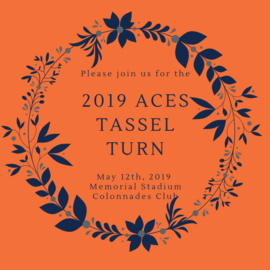 It's time to celebrate! We are pleased to invite ACES graduates and their families to a complimentary reception at memorial Stadium's Colonnades Club. The ACES Alumni Association along with ACES administrators, faculty, and staff will be on hand to congratulate the College of ACES graduates and their families as well as welcome them to the ACES Alumni Association! Graduates, please wear your cap and gown!

Great photo opportunities await you at Memorial Stadium! Premiere access to the columns and field view will be moments you don't want to miss!

Graduates will receive a free ACES Alumni T-shirt and green screen photo as a gift from the ACES Alumni Association!

Where: The Colonnades Club at Memorial Stadium - on the corner of First Street and Kirby Avenue 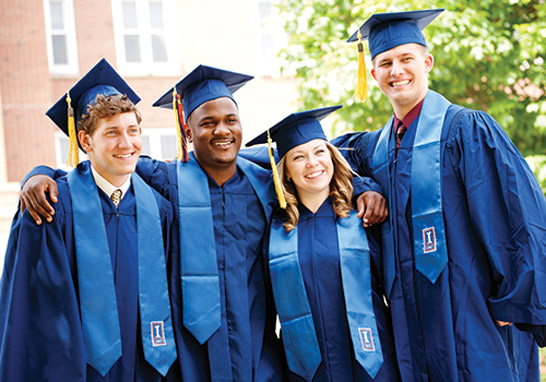 Join us to celebrate our new alumni! The ACES Commencement Date has been set!

ACES Convocation will be held: 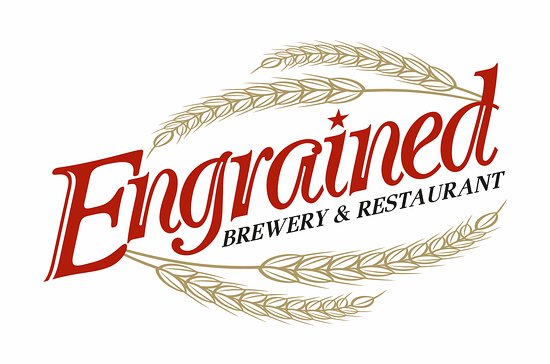 The College of ACES Alumni Association invites you to join us for an ACES in Places event.

Share your Illini Spirit in Springfield, IL at Engrained Brewery and Restaurant. You will have an opportunity to get a tour of the brewery by the owner, Brent Schwoerer, himself with dinner and a program to follow.

We hope you will join us for an evening to network and celebrate agriculture with the College of ACES. We look forward to an evening to share Illini Spirt!

Special thanks to Engrained Brewery and Restaurant.

Registration will be made available soon. 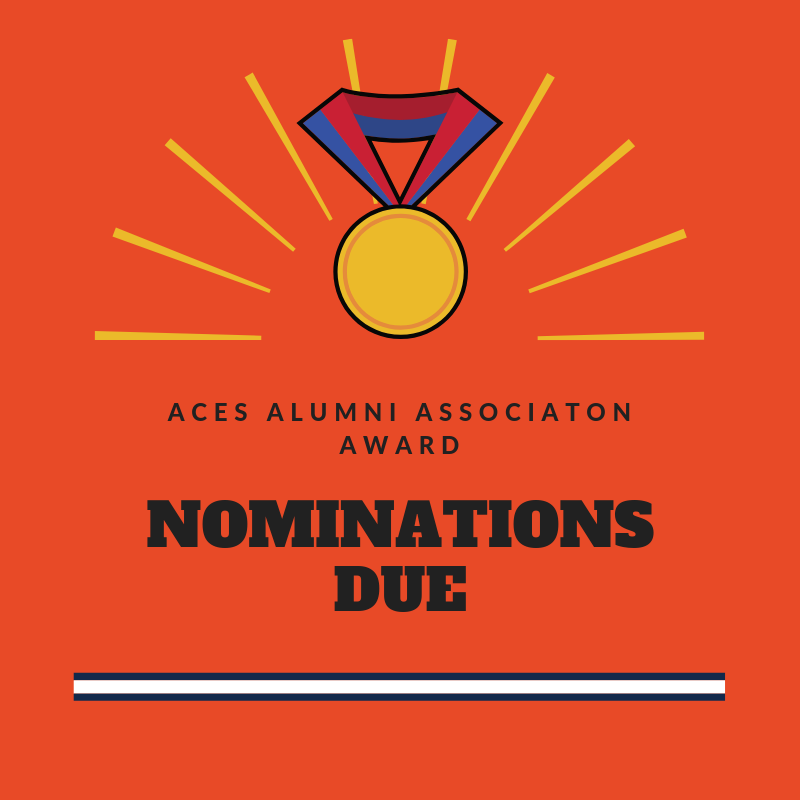 Know an outstanding young alum? Someone who graduated from the College of ACES and excelled in their chosen career? A family who has dedicated time and loyalty to the College of ACES for generations? Now is the chance to recognize them for all their hard work. Nominations are due for these awards by May 15, 2019.  For more information and nomination materials visit here.

Nomination Process/Timeline
A call for nominations will be made in coordination with ACES College Connection fall events.

Scoring
Scoring will consist of 85% professional accomplishments and 15% service to community.

The College of Agricultural, Consumer and Environmental Sciences Family Spirit Award recognizes those family members who have demonstrated their support of the College as alumni and/or current students. Selection will be based on, but not limited to a display of sincere dedication to the College of ACES and significant connections to the College and University. Awardees will be honored during the ACES Alumni Weekend activities in Fall 2019.

All nominations are kept on file for three years to be reviewed for the ACES Family Spirit Alumni Award.

All nomination materials must be submitted to:

Electronic submissions may be sent to: vealt@illinois.edu 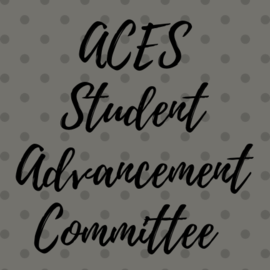 Congratulations to our newly selected Student Advancement Committee for the 2019-2020 school year!

U of I Agronomy Day 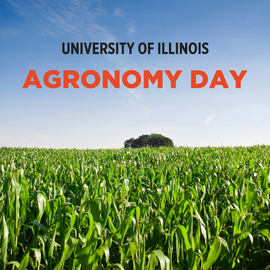 Agronomy Day is a collaborative field day hosted by the Department of Crop Sciences in partnership with several academic units in the College of Agricultural, Consumer and Environmental Sciences (ACES). From weed management to drone demonstrations Agronomy Day shares cutting-edge research with practical implications for your farm or business. CEU and CCA credits are available during tour stop. 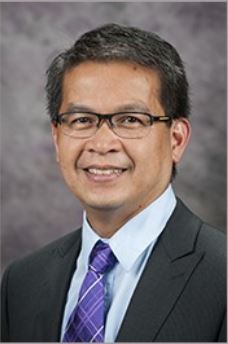 Dr. Ronaldo Maghirang has agreed to serve as the next head of the Department of Agricultural and Biological Engineering in the College of Agricultural, Consumer and Environmental Sciences at University of Illinois, Urbana-Champaign.

Over his 25-year career at Kansas State University, Dr. Maghirang has generated incredible impacts as a researcher, student mentor and instructor, which resulted in several university and national awards. He maintains an acclaimed research program focused on improving the scientific understanding of air quality issues associated with animal feeding and grain handling operations.  He also pioneered a leadership and innovation program for students in the College of Engineering at KSU. Since 2016, he has served as the Associate Dean of Research and Graduate Programs for the College of Engineering where he has gained extensive administrative experience that will serve him well as he transitions into the role of department head. Based on his ability to articulate a thoughtful vision for the department, his demonstrated long-term success as an effective administrator and faculty member, and his enthusiastic yet calming demeanor, Dr. Maghirang has the ideal skill set to bring to this position. His external perspective and extensive collaborative experiences will be valuable assets as he works with faculty, students and staff to shape the future of the department. I am thrilled that Dr. Maghirang will soon be a member of the ACES leadership team.  Please join me in welcoming Dr. Maghirang to the helm of the Department of ABE.

Dr. Maghirang will begin serving in the role of head of the Department of Agricultural and Biological Engineering on May 1, 2019. 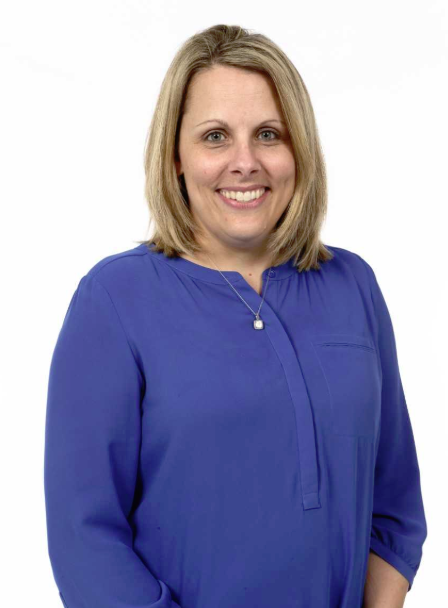 A proven higher education, marketing and communications leader, Jodi Silotto is Assistant Dean for Marketing and Communications for the College of Agricultural, Consumer and Environmental Sciences. She works to collaborate with members of the ACES community to set strategic direction for marketing, communications and web development to advance the mission of the College.

Utilizing her diverse skill sets, she has led marketing teams as the Executive Director of Marketing and Communications for Millikin University, Decatur, IL, and the College of Liberal Arts at Purdue University, West Lafayette, IN, and consistently incorporates new trends and techniques to address challenges.

Jodi received her bachelor's degree from Millikin and her master’s degree from Illinois State University. She and her husband Brian live in Champaign, IL. 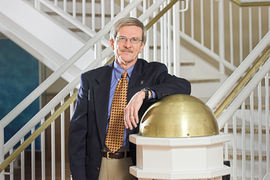 For Charles “Chuck” Olson, being assistant dean for student development and career services in the College of Agricultural, Consumer and Environmental Sciences (ACES) was his passion, what he would call a service project that happened to pay his salary. Olson passed away on April 14, 2019.

During a 30-year tenure in ACES, from 1979 to 2008, Olson advised students and student groups, coordinated recruitment efforts for the college, administered scholarship programs, including the Jonathan Baldwin Turner Scholarships; and provided opportunities for students to gain internships and experience.

Students often visited Olson’s office for advice and wisdom, especially when it came time to graduate and begin a career. With time, Olson and his staff built one of the most effective job placement programs on campus.

The family has requested that memorials be directed to the charitable cause of the donor’s choice or the University of Illinois Foundation for the Charles E. Olson JBT Scholarship Endowment (776058).

Full obituary from The News Gazette. 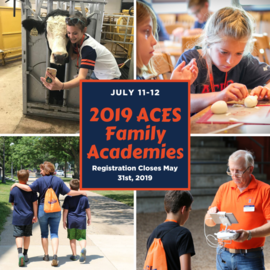 The College of ACES Alumni Association will once again host the ACES Family Academies program, July 11-12, 2019, on the College of ACES campus!  Alumni may bring youth ages 8-13 years old age with them to this hands on educational event at the University of Illinois.

Participants will enjoy the college experience living in a residence hall, eating in the dining facilities and having a tailgate and participating in educational classes on the College of ACES campus. This program will give you an opportunity to relive and share your college days as well as create new memories with your little Illini.

We hope you will take advantage of this annual opportunity to return to campus with your children, grandchildren, nieces or nephews to share in this experience!

Registration will be on a first come, first served basis. 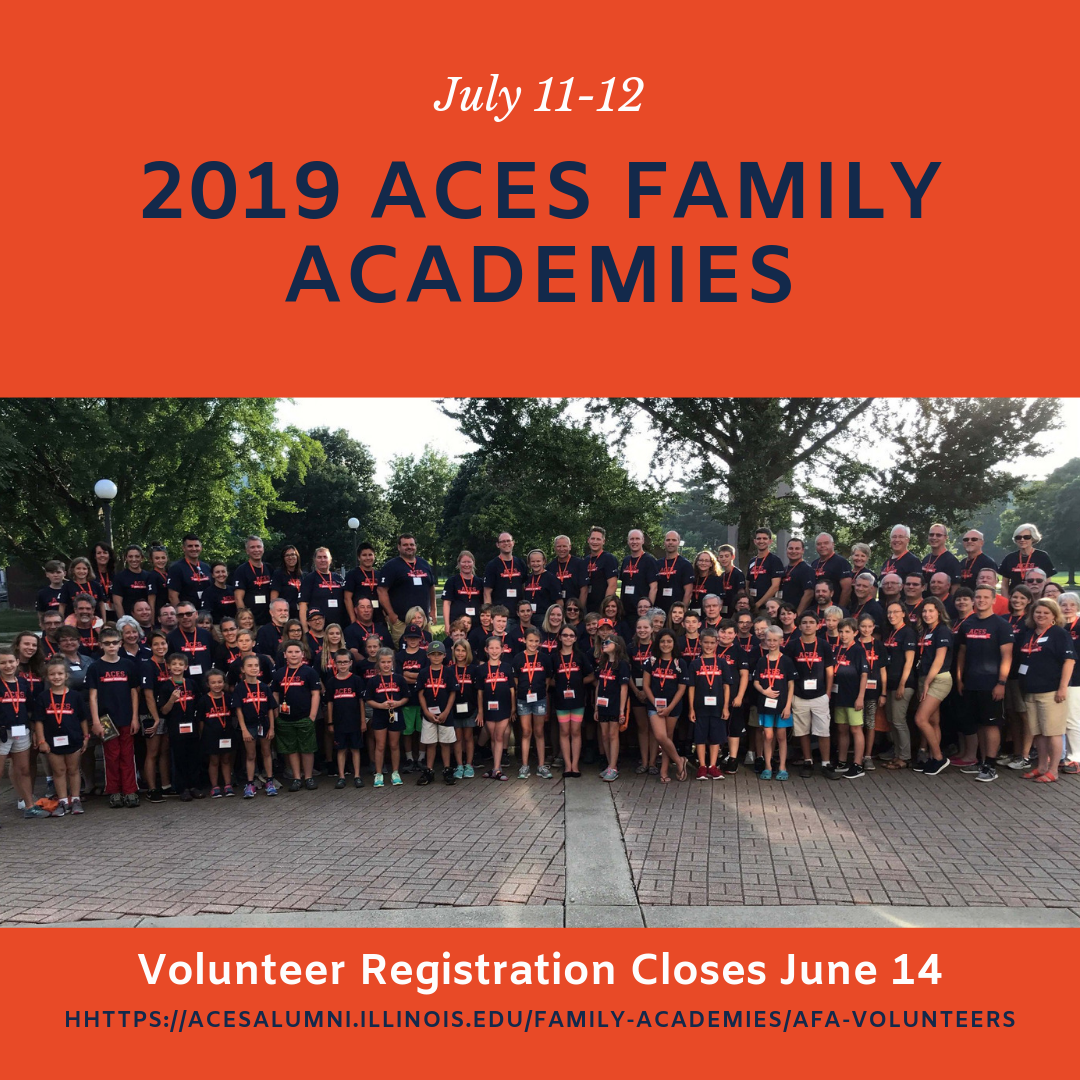 The ACES Alumni Association will be hosting the fifth annual 2019 ACES Family Academies on July 11-12, 2019 to be held on the ACES campus at the University of Illinois!

ALUMNI VOLUNTEERS
We are in need of many volunteers to help make this event successful in conjunction with our ACES Alumni Board of Directors. There are many opportunities to volunteer throughout the two days including assisting with check in/move in, moderating a session, being a bus guide, helping host our information tables, assisting with evening programs, check out/move out, etc.

STAFF VOLUNTEERS
We also need many staff that can assist with driving the campus turtle top vans to and from sessions or evening programs off the ACES campus.  This is a great opportunity to be involved, meet and visit with our alumni and participate in a session or program.  You can volunteer for any session marked (STAFF ONLY).  Some of the locations will need one driver and some will need two drivers based on participants enrolled. Staff will need to complete or have completed the Turtle Top training with car pool to be eligible to drive.  If you have not taken this class, we can assist you to set up your training.

LODGING AVAILABLE
Finally, if you would like to stay in Bousfield Hall if you are off campus, there will be a fee of $25.00 per night to cover the lodging expenses. All other costs will be covered for meals, t-shirts, etc.  You can register by the item marked (FEE) for Wednesday or Thursday evening lodging.

Visit the ACES Alumni Association website for more details and to register! 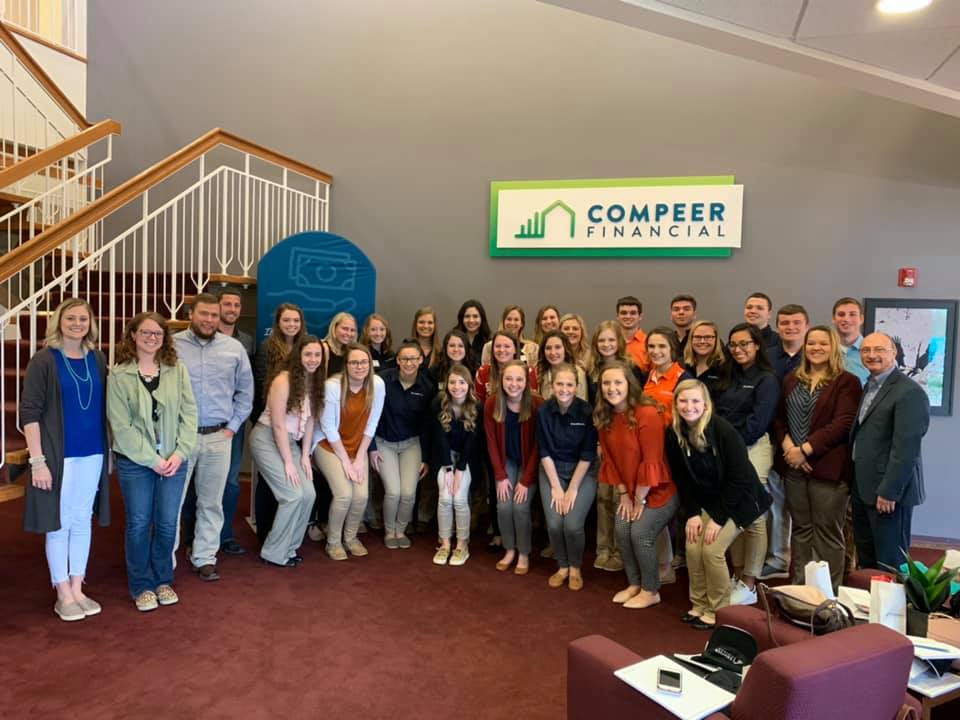 The ACES Student Advancement Committee traveled to Bloomington, IL, April 22, for their annual Professional Development Trip. The first stop was at Compeer Financial where students had to opportunity to learn about the company and network with Alumni. Then, they went to IL Farm Bureau. During their time there, students got to experience a little of each division of IL Farm Bureau. Ropp Dairy Farm, was the third stop of the day. Here the group got a tour of the Ropp Jersey Cheese processing facility and had tried some tasty samples! Finally, the group toured and had dinner with Alumni in the area at Destihl Brewery.

We want to thank all the companies and alumni for all their hard work in hosting the students! Also, thank you to Compeer Financial for sponsoring the trip! Our students enjoyed the day! 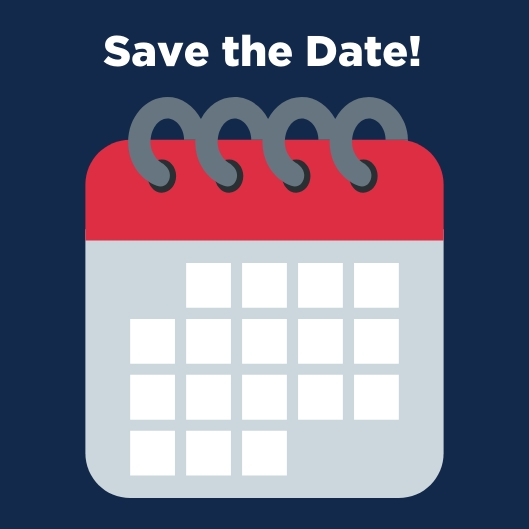 **Watch for more ACES in Places events to be announced soon.** 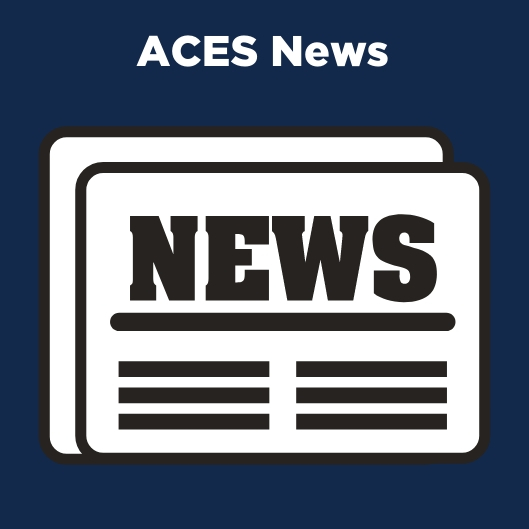 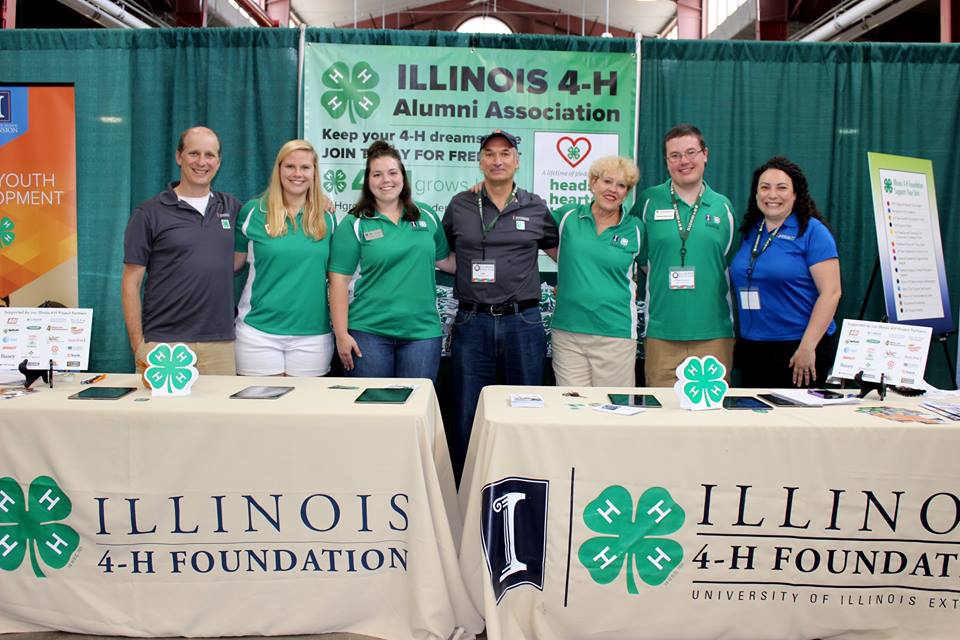 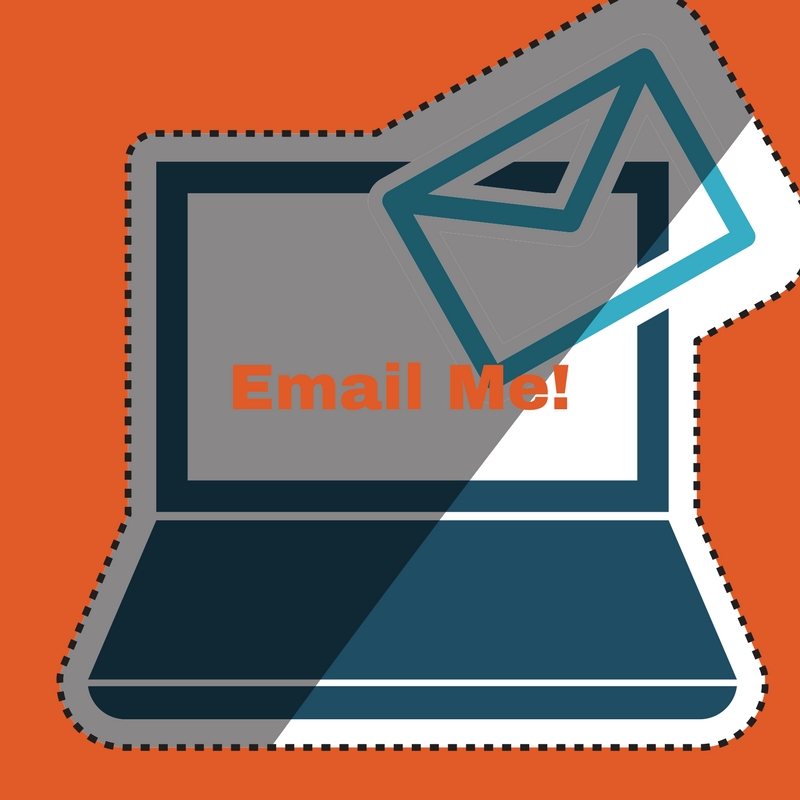 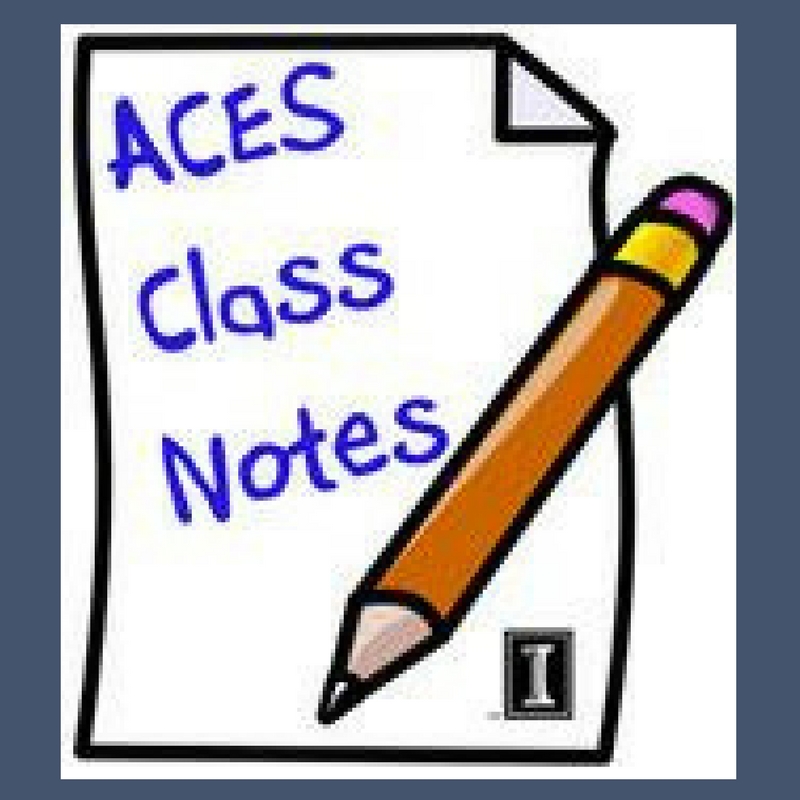 Looking for an Illini Network 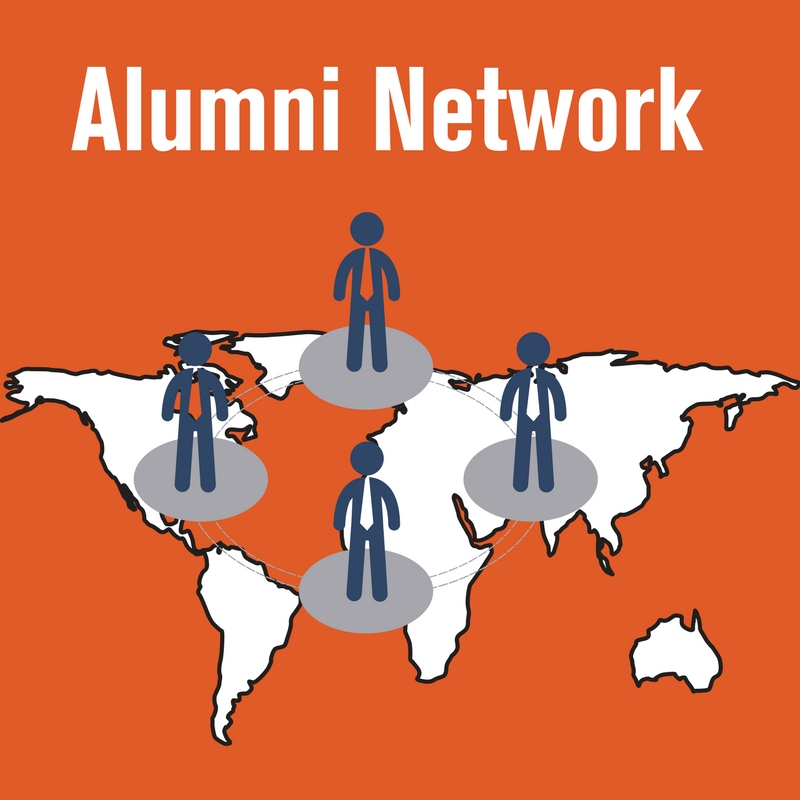 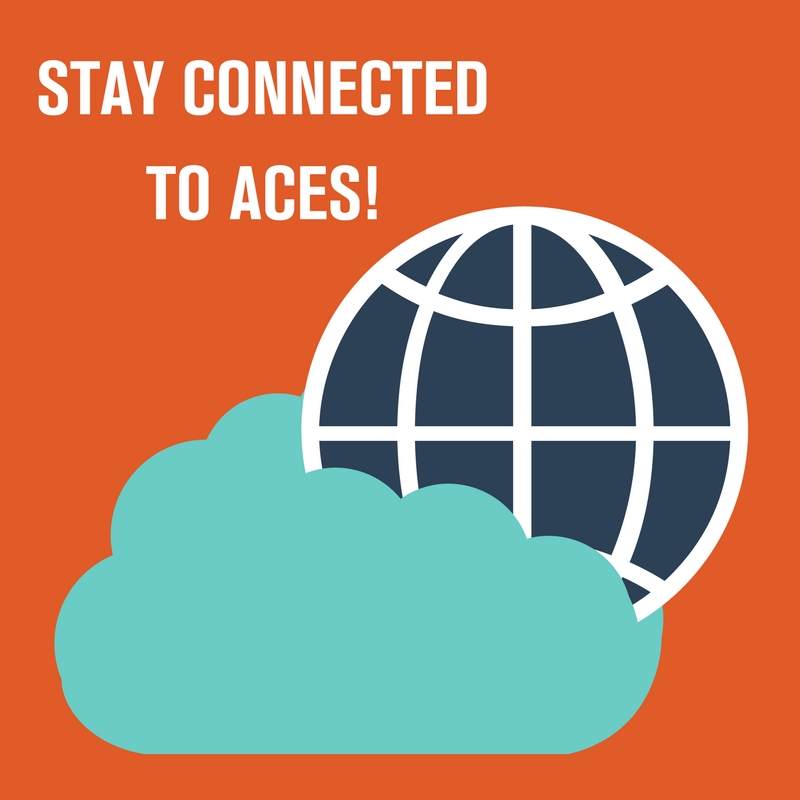 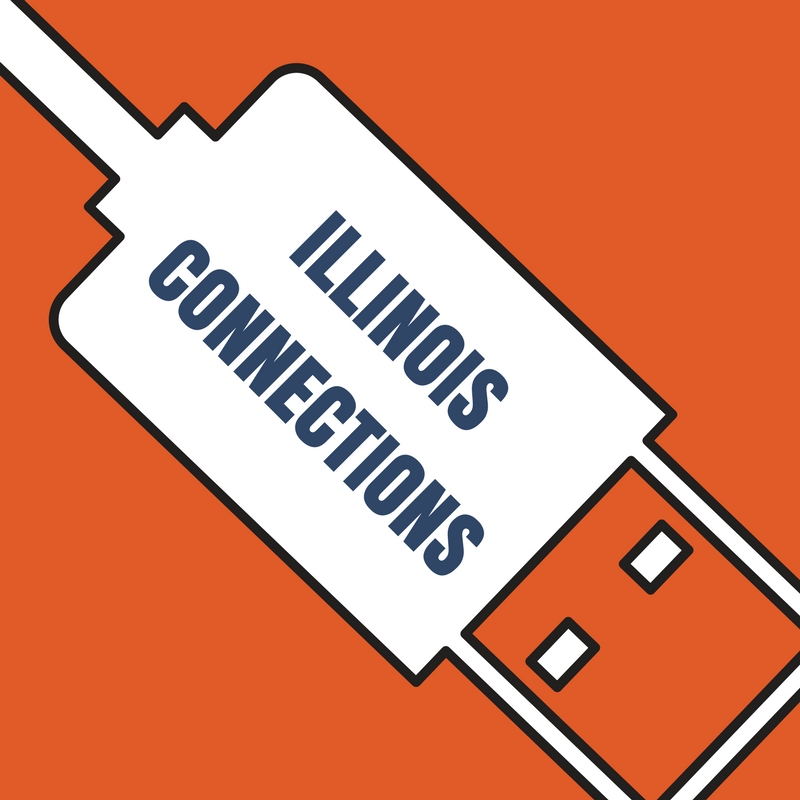 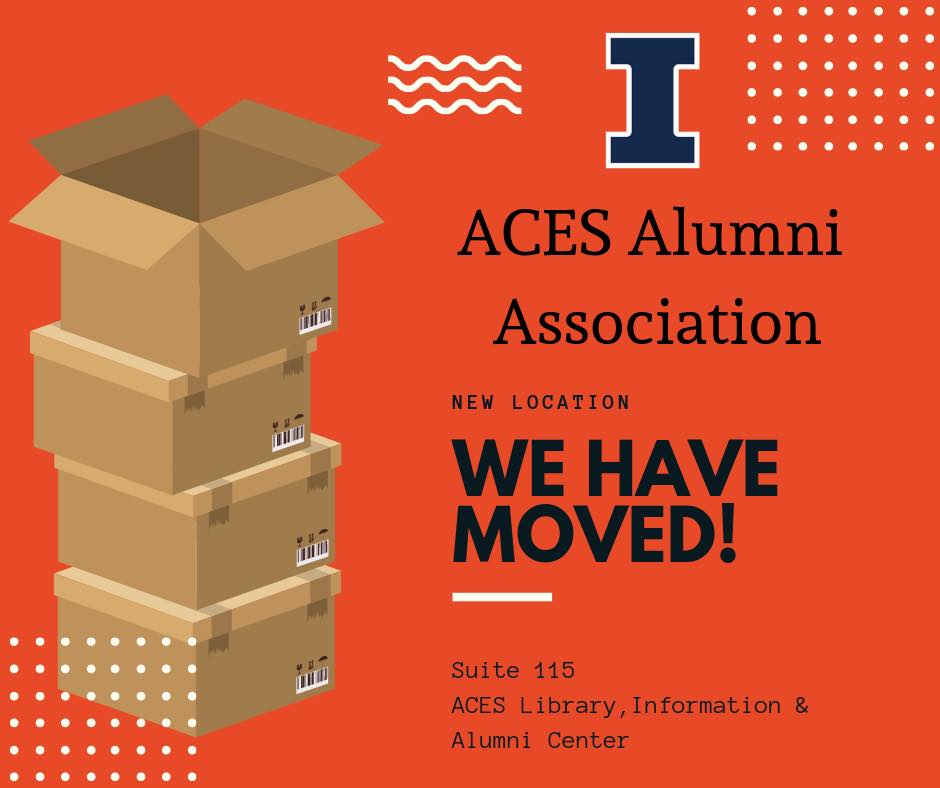 The College of ACES Alumni Association offices have moved to Suite 115 ACES Library!  Stop in and say Hello next time you are on campus!